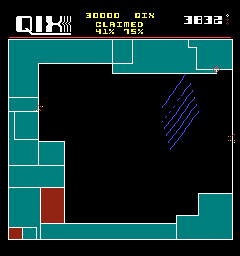 Qix is an arcade game, released by Taito America Corporation in 1981. The objective of Qix is to fence off, or “claim”, a supermajority of the playfield. At the start of each level, the playing field is a large, empty rectangle, containing the Qix — a sticklike entity that performs graceful but unpredictable motions within the confines of the rectangle. The player controls a small diamond-shaped marker that can move around the edges of the rectangle, with the goal to claim as much of the screen as possible via drawing lines. When the player completes a closed shape, the captured area (defined as the side of the Stix opposite to where the Qix is) becomes solid and points are awarded. To complete a level, the player must claim most of the playfield (the game was shipped at 75 percent for level completion, but the arcade operator could adjust the requirement between 50 percent and 90 percent). The player's marker had the option of moving at two different speeds; areas drawn at the slower speed (red on the screenshot shown) were worth double points. The player has a limited number of lives and can lose a life if the Qix touches a line as it is being drawn, or by being touched by spark – enemies that traverse all playfield edges except uncompleted lines. Additionally, a fuse appears if the marker stops moving while in the process of drawing Stix, disappearing when the player starts moving again. The player has no defenses thus all enemies must be outmaneuvered. A time meter located at the top of the screen is responsible for the countdown of the entry of additional Sparx and the mutation of all sparks to Super-Sparks, which have the ability to chase the player even up an unfinished line. After the player completes two levels, the difficulty increases. This includes multiple Qixes and sparks, speed increases, and the eventual appearance of only super sparks. In levels with two Qixes, the player can also complete the level by drawing a line that splits the playfield into two regions each containing a Qix, thereby increasing the multiplier and starting a new level.

In this game, you guide a marker which must draw rectangles and other weird objects in order to claim your territory, and you can either draw these rectangles fast or slow. Drawing the rectangles using the "slow" method awards you the most points. Once a rectangle has been made, it will be colored in to show that you have claimed your territory. While drawing the rectangles, you need to watch out for Qix (pronounced "kicks"), a series of colored lines that crawl the screen. In addition to Qix, you also need to avoid the Sparks who travel around the border, as well as any lines that you have made, as well as The Fuse, who travels along the line that you are drawing. Once you have claimed enough territory, you proceed to the next level.

You can use F1 to proceed through all the configuration screens, stopping when you see the title screen. Setup is complete.

Your goal is to claim at least 75% of the play area. You do this by making a sort of spiderweb that automatically gets coloured in. Your only enemies are the Sparx, which travel around the edge of your web and kill you by touching you, and the Qix, which move freely within the part of the play area you haven't claimed yet and kill you by touching a new thread you're still making.

The first few levels only have one Qix each, but on later levels there are two Qix, enabling you to complete the level by separating them into different parts of the play area by creating a thread in between them.

The scoring system works well: you get more points for building your web slowly (which leaves the new thread exposed to the Qix for longer), for separating two different Qix, or for claiming more than the minimum 75% of the screen (which can tempt you into making very bold moves right next to the deadly Qix).

The Qix itself is one of the most fiendish enemies I've seen in a game: mostly content to wander around aimlessly, it will occasionally dart from one side of the screen to the other in order to catch you off guard. Trying to work out when and where it's safe to create new threads, and when to run for cover, is what makes Qix so exciting.

As each generation of computer games becomes more elaborate than the last, it's easy to overlook some of the lesser known golden age titles such as this quirky game. It was never as popular as the iconic Pac-man or Space Invaders, and wasn't helped by Atari releasing it on their ill-fated 5200 and Lynx consoles instead of their more popular 2600.

This game has been ported to popular consoles, however, making it relatively easy to find second hand. Personally, I like the Game Boy version as it remains faithful to the original arcade game yet scraps the odd colour scheme due to the console's monochrome screen.

Qix is easily as addictive as Asteroids or Centipede, and it won't ruin your trigger finger. If you like the innovative arcade games of the eighties, this is up there with the best of them.